A Korea’s representative global broadcast, Arirang TV introduced Leesle Hwang, a designer from LEESLE, through the documentary program “OURS” with the theme of ‘dreaming of the hanbok world.’

Designer LEE’s interview on how she has came to create LEESLE with her solid vision and philosophy was broadcast on television around the world.

The broadcast also covers Jeonju, which is a city where designer Lee as well as LEESLE were born, designer Lee’s studio, and LEESLE’s stores. The highlight of the document is the scene where customers actually meet LEESLE through fashion show on hanbok’s day and LEESLE’s pop-up stores, and excitedly give their impressions on Leesle. 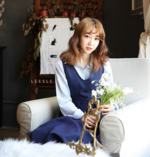 You will be the first one who knows the latest news from Leesle. You will get VIP invitations, coupons and love....through emails.

Success! Now check your email to confirm your subscription.

Sorry, the comment form is closed at this time.